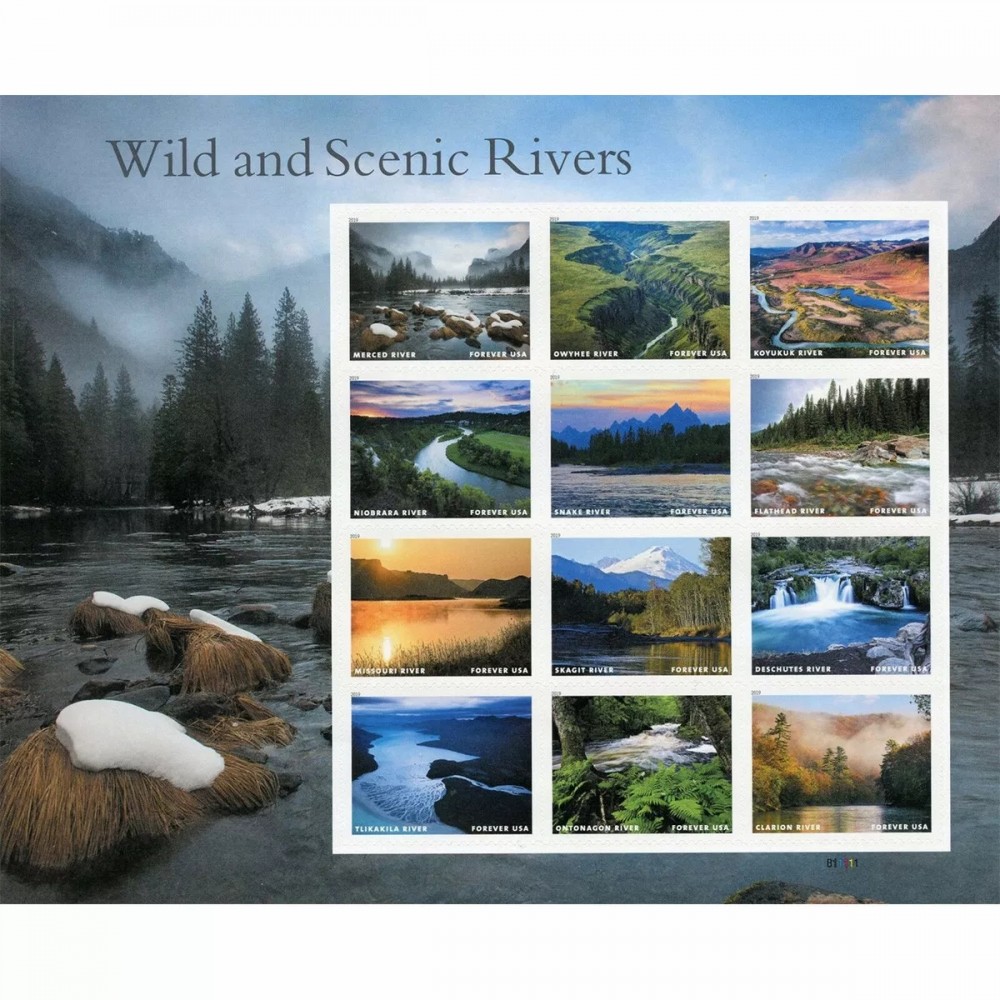 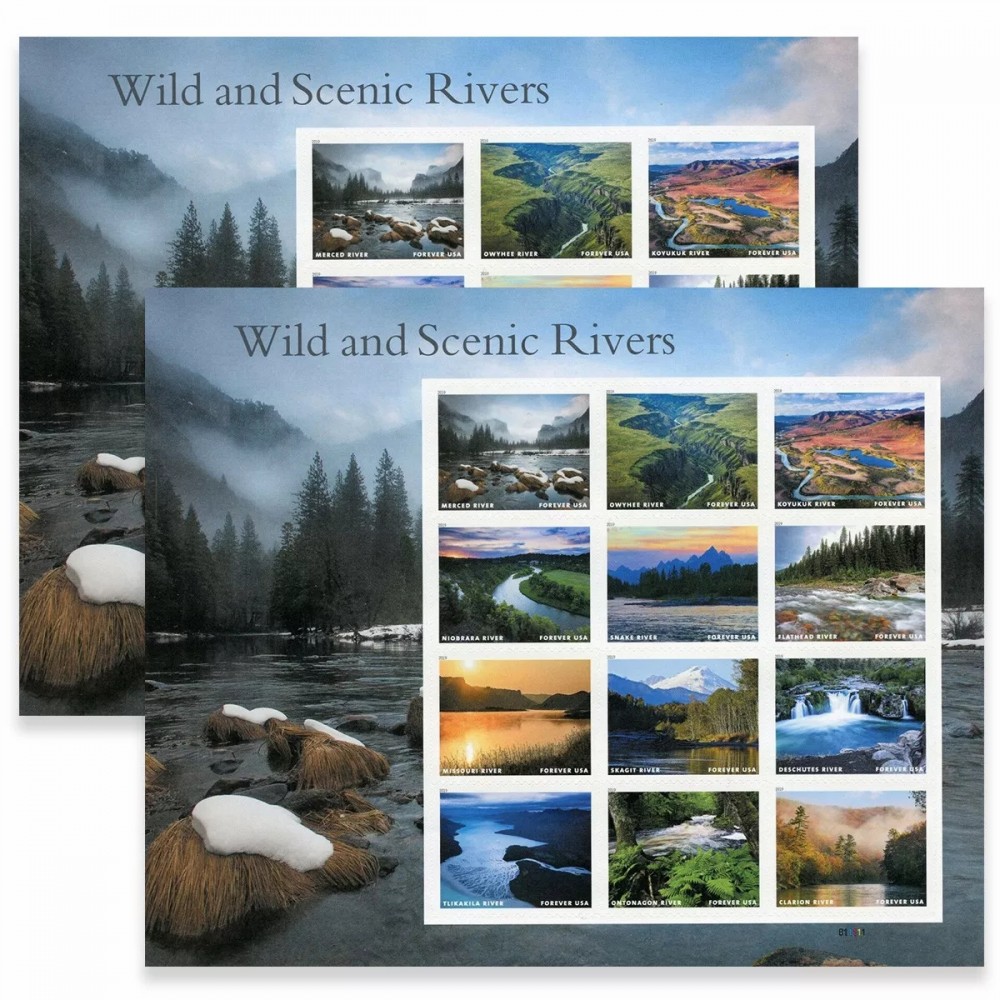 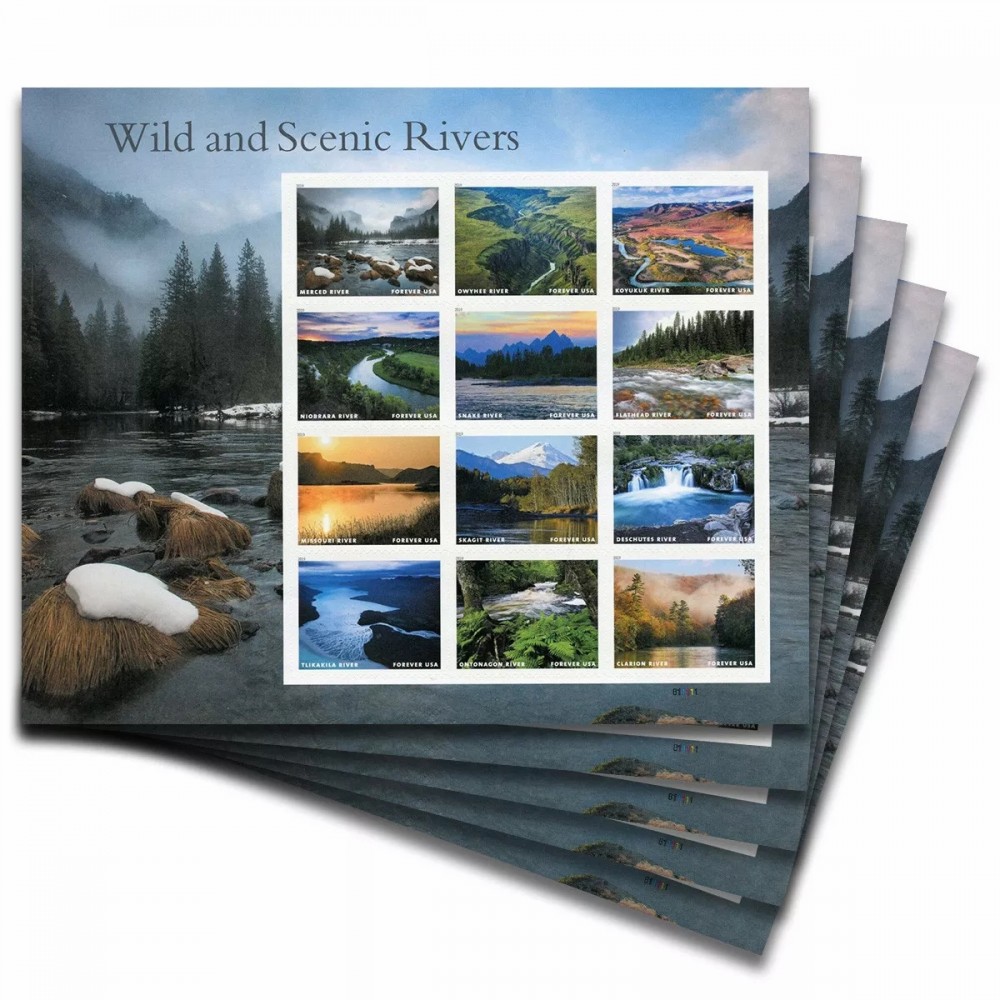 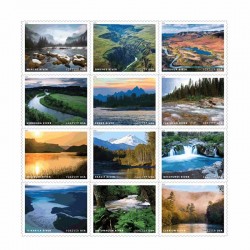 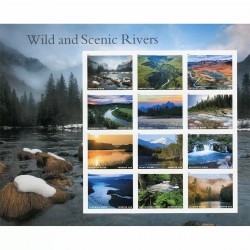 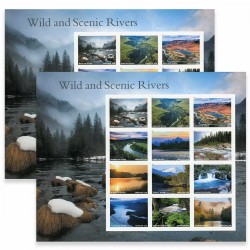 The U.S. Postal Service today celebrates America’s Wild and Scenic Rivers – those deemed outstandingly remarkable for their fish and wildlife, geology, recreation and cultural or historical significance – with 12 new Forever stamps. Each stamp in the pane showcases a different segment of the National Wild and Scenic River System.

The pane of a dozen different designs features a portfolio of photographs that beautifully represent the more than 200 rivers or river segments designated within the Wild and Scenic Rivers System. Art Director Derry Noyes designed the pane using existing photographs.

At bottom left on each stamp is the river name. The words “FOREVER” and “USA” appear at bottom right. All stamp type is in white in the same capitalized sans-serif font. The images are displayed on four rows of three stamps each, as listed below, reading from left to right on the pane.

All first-row photographs were captured by award-winning photographer Michael Melford. A wintery shot of the Merced River in California is followed by two aerial photographs: a seasonally verdant Idaho segment of the Owyhee River and Alaska’s meandering Koyukuk River.

The second row begins with another aerial photograph: Melford’s image of Nebraska’s tree-lined Niobrara River. Next are two photographs by naturalist Tim Palmer: a Wyoming segment of the Snake River with a spectacular sunset silhouetting the Grand Tetons and a Montana segment of Flathead River whitewater rapids.

Row three begins with the White Cliffs segment of the Missouri River in Montana, in an image captured by Bob Wick, a staff photographer for the Bureau of Land Management (BLM). Tim Palmer photographed the Skagit River in Washington State, with volcanic Mount Baker in the background. Waterfalls along Oregon’s Deschutes River were photographed by Wick.

The fourth and final row offers an aerial shot of the Tlikakila River in Alaska, captured by Melford. Next, in a Palmer photograph, is a view of Ontonagon River rapids running through lush greenery in Michigan. The final image shows Pennsylvania’s Clarion River, mist-shrouded in a photo by Wick.

Framing the stamps is selvage that again features Melford’s Merced River image. At top, the title “Wild and Scenic Rivers” is printed in a coordinating gray, left of center, in a graceful serif font. 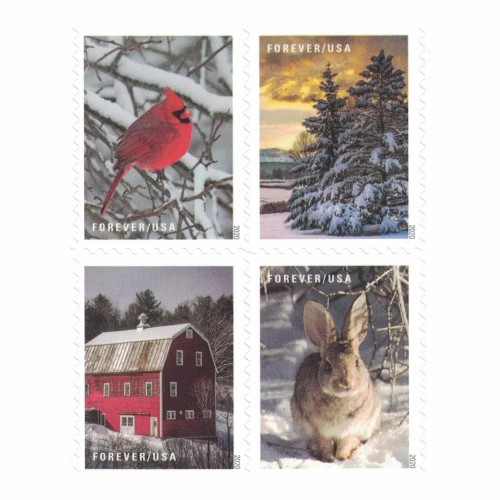 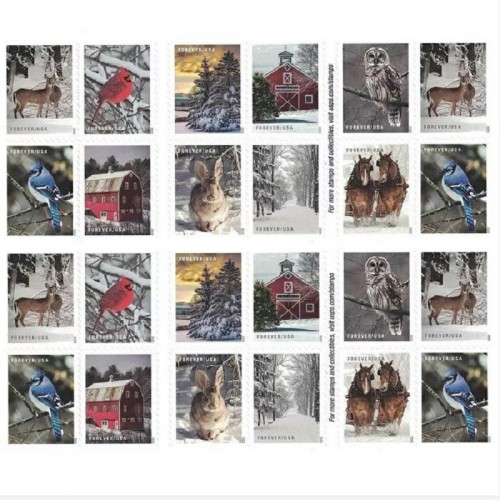 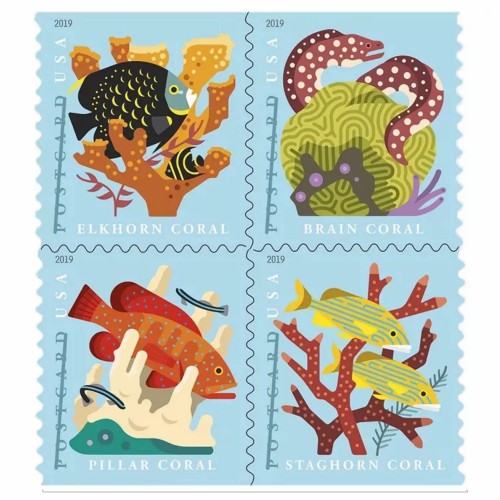 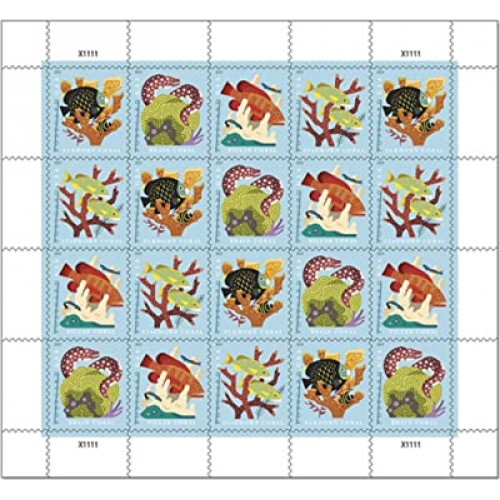 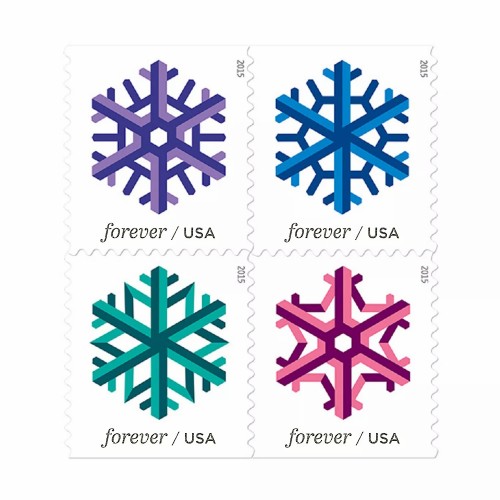 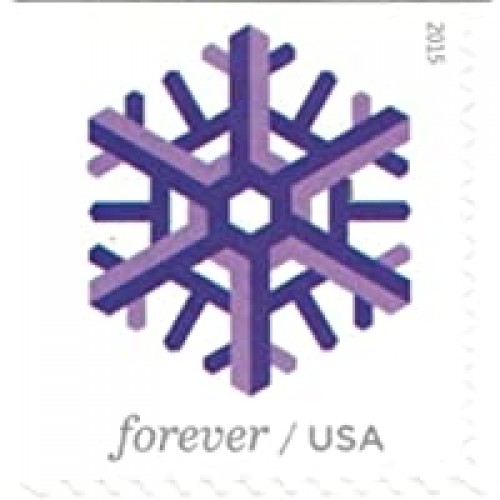 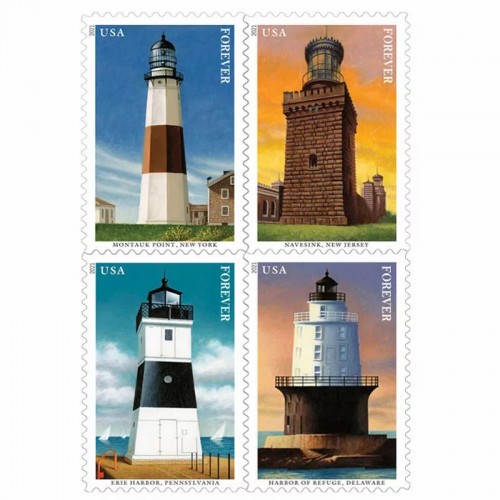 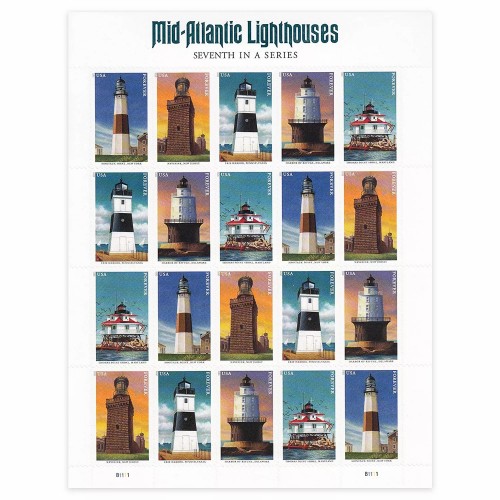 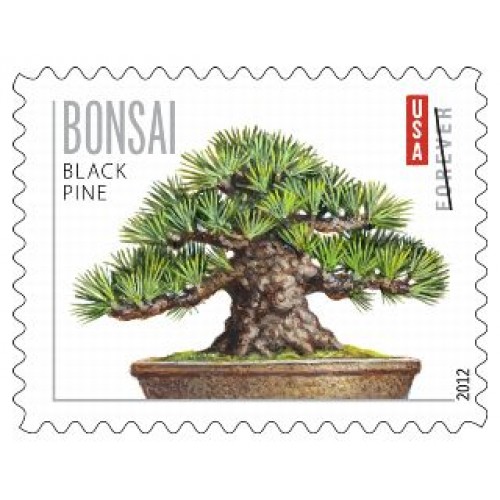 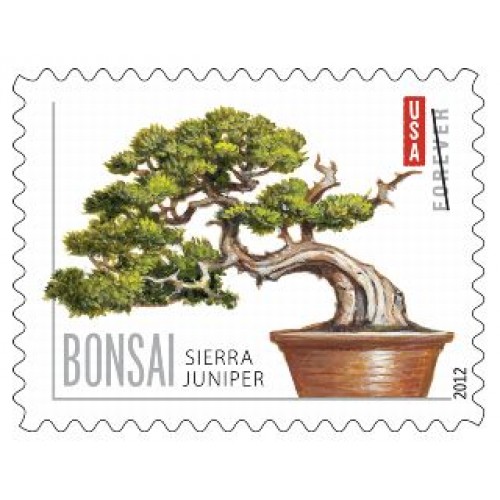 -50 %
Bonsai Tree Forever Stamps 2012
With these five stamps, the U.S. Postal Service® cele­brates the beauty of bonsai, a horticultural art form that has become quite popular in the Unite..
$29.99 $60.00
Add to Cart
Add to Wish List Compare this Product
Buy Now Ask Question